Bintan Turtle Conservation
Lagoi, Kepulauan Riau, Indonesia
The turtle conservation initiative in Bintan Resorts started in 2004. There are only 1 or 2 nests a month found in the nesting season whereas in 1950's fishermen found 1 to 2 nests a night. The nesting season is from March to September. To date, more than 4000 turtle hatchlings released to the sea. What do we do? Save the turtle eggs, incubate the eggs in hatchery, release the hatchlings together with tourists, volunteers and villagers and give awareness to villagers and students from local schools in surrounding area. By saving them, there’s a hoping to see them more in the future

Indonesian resort located close to the thriving metropolis of Singapore is trying to do its part for marine turtle conservation, as the reported by the resort's senior manager for environment and health.

This week, PT. Bintan Resort Cakrawala together with Nirwana Gardens Resort released 81 turtle hatchlings to the sea. The release of the hawksbill hatchlings was part of two-year old programme of the resort's Environmental and Health Division, which is attempting to bring back the old glorious days of turtles in the '50s along the northern coastline of Bintan Island.

Understanding that these turtles are an endangered species, an initiative was started to try to restore the turtle population to at least double from what Bintan has today. Backed by Bintan Resorts' vision on environmental protection and management, the project was supported all the way to the top management. It is also hoped that this initiative can, at a later stage, be added to its ecotourism activities.

In 2005, 550 hatchlings were successfully released. This year to date, 296 hatchlings were already released to the sea from a total of 1,127 collected so far. The hatching success rate has varied between 70 - 90%, depending on several environmental factors.

Said Vice President Director B.G. Chin Chow Yoon: "This initiative is a proof that our concern and commitment to environmental protection is not limited to mitigation environmental controls, such as STPs and solid waste management."

While it is still early to describe it as a success, the programme definitely has shown a high potential for raising public awareness, and has also shown that resorts can also contribute to the protection of endangered species.

Posted by Bintan Turtle Conservation at 13:54

Please visit and join our release! 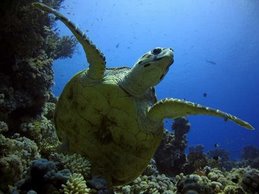